Posted on October 22, 2019 by Barton Farms and Gardens

“The turkey is in comparison a much more respectable bird, and withal a true original Native of America….” – Benjamin Franklin 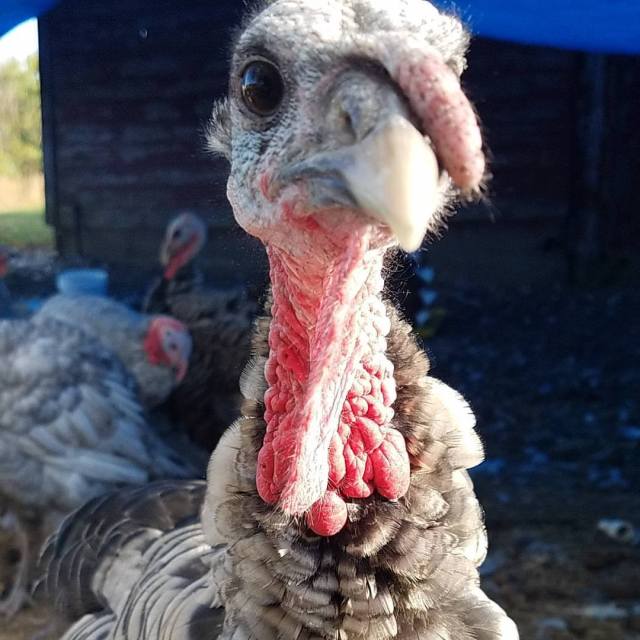 Turkeys are probably my favorite animal. They get a bad rap for being stupid, and sometimes they act in a way that may justify that bad rap, but for the most part they are majestic, inquisitive, beautiful animals. And they’re native. I love them.

We raise heritage breed Narragansett turkeys. We also have a couple Blue Slates (RIP Buford T. Justice) and a few wildish turkeys thanks to the wild Toms from the woods coming up into the yard and making themselves at home among our hens. This season we had 6 hens build nests (two in the coop, two in the compost piles, and two on either side of the darn road by the ditch!) and hatch their own poults. They were much more successful than we ever thought they would be and hatched nearly 40 babies!

If you’re interested in making a heritage breed turkey the centerpiece of your holiday feast this year please consider ordering one from us. We are asking $7/lb and they will be available for pick up at our farm Tues (11/26) and Wed (11/27). We cannot guarantee specific weights but we will do our best on a first come first serve basis. Reach out to us via email to order your turkey – bartongardens@gmail.com.

Narragansetts are unique to America and are descended from native wild turkeys and the domestic turkeys brought to American from Europe in the 1600s. They are named for the Narragansett Bay in RI, the place where they developed. They are included in the Slow Food Ark of Taste and they are delicious! Heritage birds offer a more equal ratio of dark to white meat. Their richer, denser, “gamier” meat is precisely what got us hook, line, and sinker after eating our first bird. Us Bartons are leg and thigh folks. 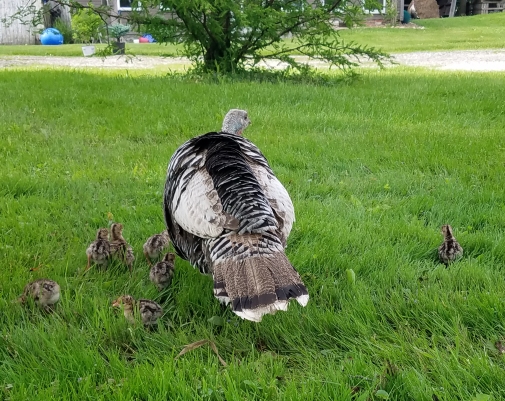 So you may be asking – what does “heritage breed” mean anyways? The Livestock Conservancy has three qualifications that must be met for a turkey to be considered a heritage breed: (1) The ability to mate naturally; (2) long, productive outdoor lifespan; and (3) slow growth rate. 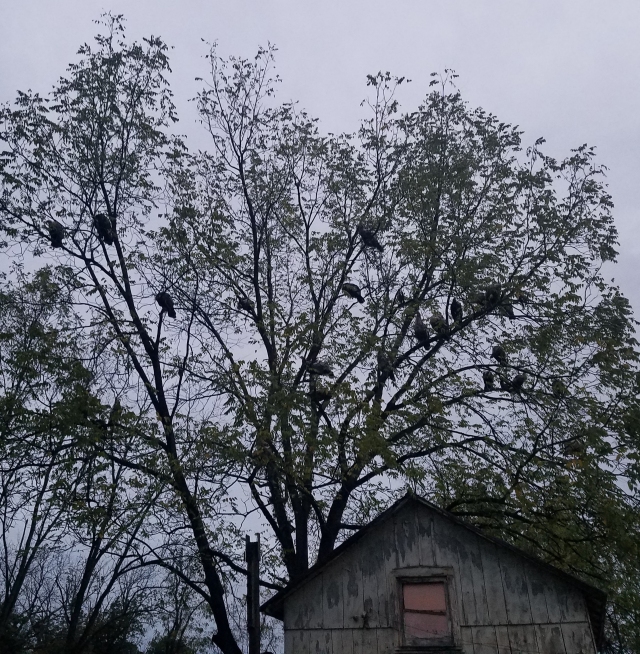 Real turkeys can fly and once they figure it out they abandon the coop and roost up in the trees.

We eat a lot of turkey in America and an estimated 46 million turkeys will be sold for the Thanksgiving holiday. According to Modern Farmer (2016), 99% of the 230 million turkeys raised each year for sale as whole birds, ground meat & sausages, lunch meat, and more are Broad Breasted Whites.

You really should read this: How Turkeys Got Broad, White Breasts (2014). It’s super interesting.

The Livestock Conservancy exists to protect endangered livestock and poultry breeds from extinction and they claim that no domestic farm animal is more genetically eroded than the turkey. Broad Breasted Whites have been bred to grow very big very quickly and they have those big, hulking breasts that so many of us associate with the Thanksgiving feast and the deli counter. Those hulking breasts also inhibit the animals’ ability to mate naturally and fertilized eggs can only be produced via artificial insemination. And on that note, according to Modern Farmer (2014) “…more than 99 percent of American breeding stock is tied to a few strains of Broad Breasted White.”

Broad Breasted Whites will reach market weight in just 14 to 18 weeks – they are excellent feed to meat converters – whereas heritage breeds will take 28 weeks+. And our Narragansetts will never grow to those massive 30lb frozen birds you find at the supermarket. We hope our oldest poults,  hatched in early spring, will dress out at 16-18lbs.

In the age of quick, cheap eats we have gotten away from a flavorful, natural tasting turkey in order to have huge, bland breasts that we slather with gravy. Don’t get me wrong, I love gravy but I much prefer rich, flavorful thigh meat and biodiversity on my holiday table.

It’s not cheap to raise heritage breed animals. The poults are expensive. We hatched our own this year but when we bought from the hatchery last year days old Narragansetts were nearly $12/each while Broad Breasted Whites were just $6/each. Heritage breeds take nearly twice as long to reach market weight and that means more feed costs and more labor.

Mike and the kids and I raise these birds because they are fun and delicious and we want to inspire folks to think about genetic diversity when it comes to their food. Heritage turkeys are the heirloom tomatoes of the meat world! I wax poetic about heritage breed turkeys because I truly love these animals. I’m a total nerd for them, even as I curse them every morning when they fly into the road or when I step in a big pile of their poo.

But all that being said, we understand that farmers who rely solely on farming to make their living, especially those raising livestock, have a difficult time turning a profit on heritage turkeys. In addition to the extra feed and labor costs, many consumers want what they’re used to and that means big breasts and mild flavor. I do not want to take anything away from our local farmer friends raising commercial turkeys. These are good people and damn fine farmers who are making a living off the land and are raising their animals humanely. Their Broad Breasted Whites are pastured so they are able to peck around for bugs and plants and feel the breeze. If you aren’t ready to make the leap to a heritage turkey we understand but PLEASE support local agriculture! Seek out a local farmer and order a pasture-raised turkey. Two fellow Haymaker Farmers’ Market vendors we know and respect who are raising turkeys are Mason Kisamore Family Farms and Tierra Verde Farms.

Please reach out to us if you want to know more and please consider a heritage breed turkey from our rag-tag turkey farmer family this season. 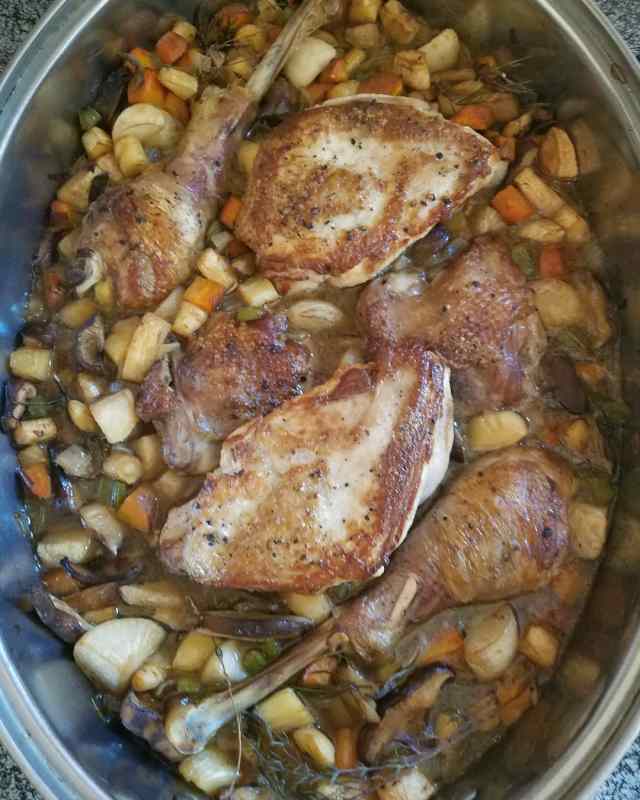 My husband and I are bringing an old family farm back to life while simultaneously working full-time jobs and raising two kids. It's a gas!
View all posts by Barton Farms and Gardens →
This entry was posted in Uncategorized and tagged #eatlikethelocals, #haymakerfarmersmarket, #heritageturkey, #narragansett, #supportlocalagriculture, heritagebreed, narragansettturkey. Bookmark the permalink.