The week of the crock pot

Posted on February 27, 2014 by Barton Farms and Gardens

Eating well when you’re broke as hell. AKA the week of the crock pot.

The pay schedule of my academic day job is monthly. Add that to the seasonal aspect of Mike’s job and old man winter’s heating oil gut punches and you can guess that by the end of the month we are often stretching our pennies. This week that meant raiding the freezer and bustin’ out the ol’ crock pot.

I honestly don’t use my crock pot that much. I should probably use it more. Even Mike said, “Crock pots seem sweet. Maybe we should use it more.”

Sunday I pulled a half of a chicken and a venison roast out of the freezer. The chicken was one of the roosters we butchered a while back and the writing on the vacuumed sealed bag said “half a cock.” Haha!

Monday morning Mike put the chicken in the crock pot with a little water, a bouillon cube, some onions, and some garlic. When I got home I pulled it out and this is what it looked like.

I trashed the skin and pulled all the meat from the carcass. Then I decided to make a soup.

I strained the cooking liquid from the crock pot and set my stock aside. I melted a little duck fat in my dutch oven and cooked some onions and potatoes. I stirred in some flour and some spices (dried thyme, cayenne, s&p) and cooked that for a minute or so. Then I added my stock and some milk – we had a chowder on the way folks!

The extra stock went into the fridge and once my potatoes were tender I added my chicken and two cans of drained corn to the mix. And there you have it – chicken corn chowder on a shoestring budget. Mike’s take – “This is pretty damn good.”

Then a day or so later he stuck a venison roast in the crock pot. Same story – a little water, some bouillon, garlic, onions, s&p. It just so happened that day wasn’t that awesome of a day and I was needing some comfort food. Specifically, I was in need of gravy.

How about “beef” and noodles with gravy? And some wilted spinach for good measure.

A bag of egg noodles or homemade noodles – whatever you want

Directions:
Season your roast with salt and pepper and put in your crock pot with some water, a beef bouillon cube or two, chopped onions, and a couple garlic cloves. Plop a couple tablespoons of butter on top of the roast if using venison. (I read that somewhere and thought I would try it. I don’t know if it did a whole lot). Cook your roast on low for 6-8 hours until tender.

Remove the roast to a plate to cool. Strain the cooking liquid from your crock pot and reserve the stock.

Once cool, chop or shred your meat and set it aside. Then get a big pot of water started to boil your noodles.

Melt your butter in a large skillet and once it’s melted whisk in the flour. Whisk constantly until it’s a nice shade of brown. Add your warm stock to the roux and continue whisking. It should start to thicken up after not too long. Maybe like 10-15 minutes. Once it’s thick taste it and then season it with salt and pepper as needed. Mostly pepper. Add your chopped “beef,” turn the heat down to low, and stir occasionally while you cook the noodles. Once the noodles are done drain them and toss them with a little butter.

Put some noodles in a bowl and cover with “beefy” gravy. 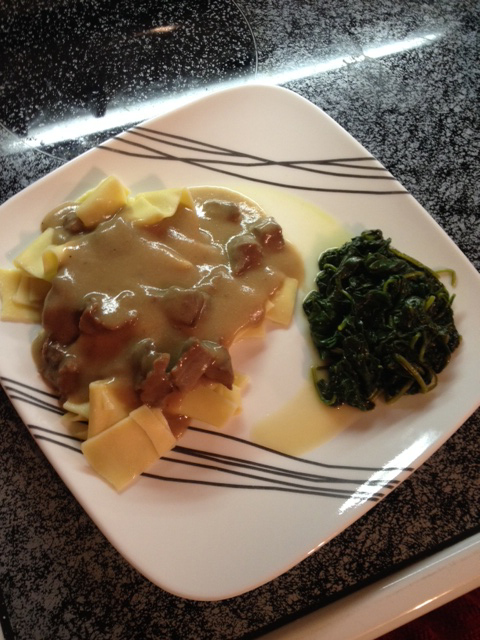 Mike’s take – “Daaaaam. This is really good.” To which I replied, “Awesome. Because it costs like $5 so we’re going to be eating it again. And probably a few more times after that.”

Oh! And speaking of good eats – this Saturday is the annual Boy Scout Spaghetti dinner.

My nephew’s troop hosts this delicious fundraiser every year and it’s always a good time. The sauce is homemade by the scouts and their dads. There is a killer bake sale and a pretty radical prize raffle. If you’ll be in the Akron area this Saturday you should totally check it out. It’s only $7.50 and it’s for a great cause.

My husband and I are bringing an old family farm back to life while simultaneously working full-time jobs and raising two kids. It's a gas!
View all posts by Barton Farms and Gardens →
This entry was posted in Uncategorized and tagged BSA Troop 390, cheap eats, chicken, venison. Bookmark the permalink.