Posted on October 15, 2013 by Barton Farms and Gardens

Bartering is freaking awesome. Swapping homemade or homegrown items and keeping the man and his currency at bay is enjoyable on many different levels. Trading something that has my own blood, sweat, and tears for something equally awesome is super rewarding.

Bartering, trading, swapping, whatever you want to call it – it’s old timey – but it’s coming back with a vengeance.

Food Swaps are popping up all over the place. The Countryside Conservancy hosts regular swaps around Akron and there is even a National Food Swap Network. We had one last year at the Kent Haymaker Farmers’ Market but wouldn’t you know we picked a date that came with a blizzard! Rats!

Last summer I was totally enamored with the idea of a swap so I decided to host one at my house. It was awesome! So awesome in fact that I decided to have another one this year.

My Sunday Funday was also the Barton Farms and Gardens Homemade and Handcrafted Swap and Potluck. And it ruled!

A group of family and friends came over and we had a pretty awesome afternoon. First the potluck. I made cock soup (a play on chicken chili verde with the majority of the ingredients coming from our farm/garden) and oven braised Breakneck Acres spare ribs.  I also provided a delicious loaf of Spanish bread picked up fresh Saturday morning at the market.

And after our bellies were full we got to swappin’.

I was so excited that I failed to take any pictures of the tables all set up with the swapables. Dang it!

But here is a picture of what I ended up with at the end of the swap.

Look at this incredible haul! 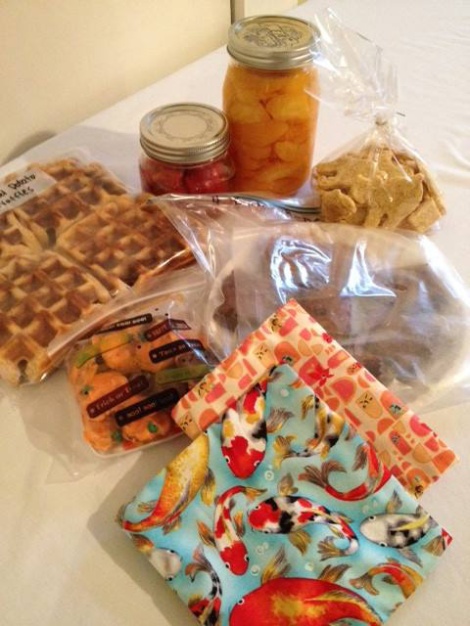 And that is just what I ended up with. There were loads of other great things available including handcrafted greeting cards from my pal Kristen of Craft Goblin, homemade coffee cozys from my friend Emily of Gainer In Stitches, a whole peck of homegrown pears, homemade walnut cranberry bread, homemade wine (the good stuff from real grapes that my brother-in-law presses himself in his garage!), homemade butternut squash ravioli, and all kinds of preserved goodness – canned peaches, canned pears, homemade V8 juice, and spicy garlic pickles.

Check out what Kristen took home. 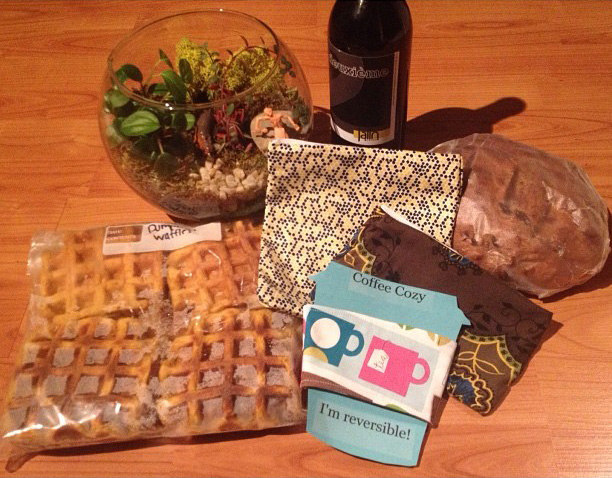 She lucked out and won a door prize – that sweet zombie terrarium that Diane made. She also went home with wine, cranberry walnut bread, two reusable bags, a coffee cozy, and some of those killer pumpkin waffles.

And here was Emily’s haul. 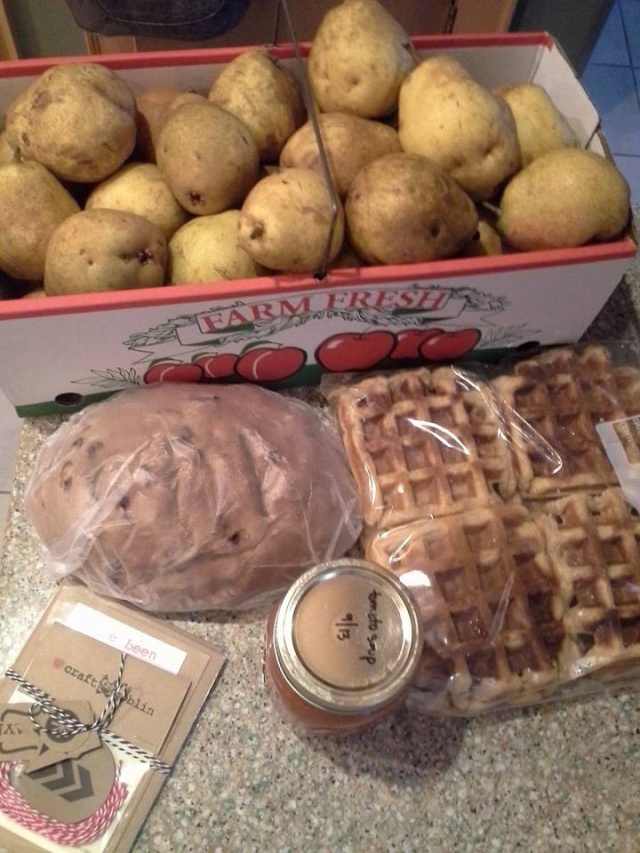 She went home with a peck of unsprayed pears, waffles, a pint of tomato soup (I made that – hope she liked it!), a set of Craft Goblin cards, and a loaf of cranberry walnut bread.

Everyone went home a winner.

If a food swap sounds like something you’d enjoy let me know! We’d like to plan another one this winter at  the Kent Haymaker Farmers’ Market and your insight could be helpful in the planning process. And if you’re in the Akron area be sure to check out the Countryside Conservancy swap – I think the next one is later this week at the Art Museum but there is still time to register.

And if you’re not all about a public swap that’s ok too. Just swap every now and then with a friend or family member.

Bartering is by far the best form of currency. And I LOVE that it is becoming new timey (is that a thing?).

My husband and I are bringing an old family farm back to life while simultaneously working full-time jobs and raising two kids. It's a gas!
View all posts by Barton Farms and Gardens →
This entry was posted in Uncategorized and tagged Breakneck Acreas, Countryside Conservancy, Craft Goblin, Food Swap, friends and family, Gainer In Stitches, Handcrafted, Homemade, kent haymaker farmers' market, Pot luck. Bookmark the permalink.