Posted on August 5, 2013 by Barton Farms and Gardens

We had a variety of great food based on the “please bring a dish to pass” model. I love a good pot luck and Saturday was exceptional! Everyone brought great stuff that complimented my meat offerings perfectly so thanks family and friends!

So what were the meat offerings? I did Angie’s Spicy Pulled Pork and two kinds of BBQ chicken. There was none left at the end and I’ll take that as a good sign!

This is my sister-in-law’s recipe and it’s awesome. Soy sauce, brown sugar, scallions, and plenty of ginger, garlic and red pepper flakes make this one a winner. I made this on Friday and then just re-heated it for the party.

I slow cooked two pork shoulders in the oven at 300 degrees for about 5 hours. Then I shredded it and added it back to the juices. Spicy and delicious on a bun or as just a mound of meat on your plate!

Friday I brined the chicken in a vinegar based brine for about 6 hours. Then I rinsed it well, patted it dry, and rubbed it down with a spice rub. I wrapped up the chicken in foil and baked them in a 300 degree over for about an hour and 20 minutes.

I drained out the juice (it was later added to the bbq sauce) and stuck all the chicken in the fridge. Saturday afternoon I finished off the chicken on the grill. I did one round of the usual vinegar-mustard bbq sauce I always make and then I did the second batch with Michael Symon’s Cleveland BBQ sauce – chipotles in adobo, vinegar, mustard – delicious.

At 2am after a couple of drinks I wanted a chicken leg so badly. No dice. All gone. And even though it made me grumpy it also made me happy that the chicken was such a hit.

The pudding shots were also a huge hit. We did chocolate shots, vanilla shots, and vanilla with bourbon cherries.

Whisk together the pudding, vodka, amaretto, and milk. Gently fold in the cool whip. Spoon into small shot glasses and then dunk a bourbon cherry in the middle. Let them set up in the fridge overnight or for several hours at the very least. This double recipe yields about 60 1 oz. shots. 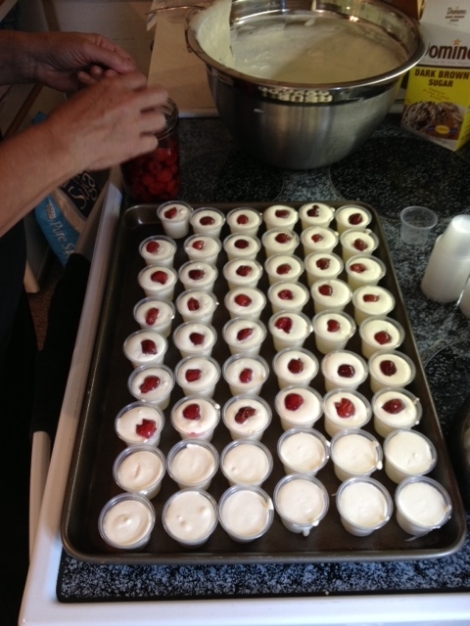 I LOVE throwing a good party and I think this was one of my best yet. Thanks to everyone who came and celebrated with us. And Happy Birthday Mike!

My husband and I are bringing an old family farm back to life while simultaneously working full-time jobs and raising two kids. It's a gas!
View all posts by Barton Farms and Gardens →
This entry was posted in Uncategorized and tagged bbq chicken, good times, michael symon, pudding shots, pulled pork, sky lanterns, smitten kitchen, speed pitch. Bookmark the permalink.