Cue the Eddie Money – “Give me some water!”

We have a lot of outside spigots.

The one on the left is at the back of the yard before you reach the old orchard. The one in the middle is in the old orchard and super close to our garden. And the one on the right is at the old milk house which is close to the chicken coop/temporary goat house. Watering the garden and the animals is pretty important and not having to lug buckets an acre is much preferred so we had to get this water working!

The first two spigots haven’t been used in a really, really long time. Probably like 20+ years. But I think the spigot on the right (the one by the old milk house) was in operation fairly recently.

Here is where you control the water to the milk house spigot. 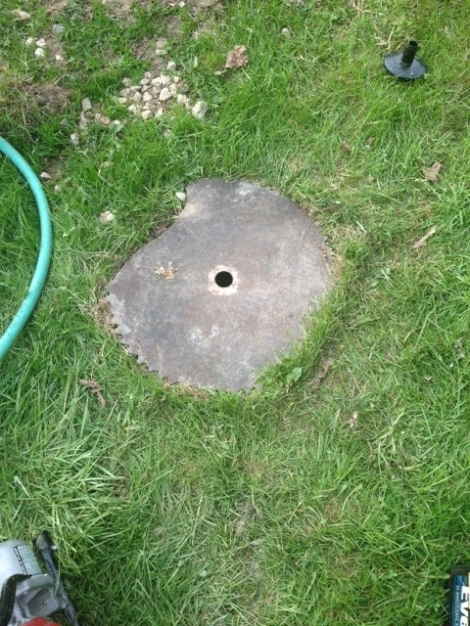 Underneath this saw blade was a crazy deep hole with a huge can. Mike had to build his own tool to be able to reach down to the knob. Here it is. 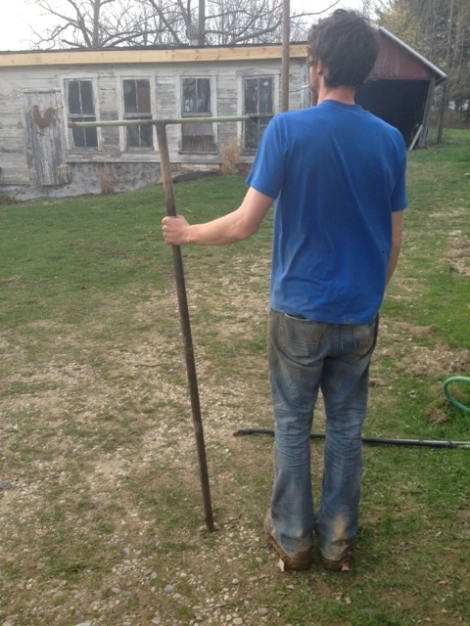 He welded this together and then somehow formed the bottom into a square shape that fit on the knob way at the bottom of the pit.  “Turning this on was a real bitch.” (His words). But the good news is that we have water close to the animals. Woohoo!

The next water project proved to be a bit trickier. In the yard there were a few pieces of wood covering what we were told was the spot where you turned the water on/off. Mike dug it up to investigate. 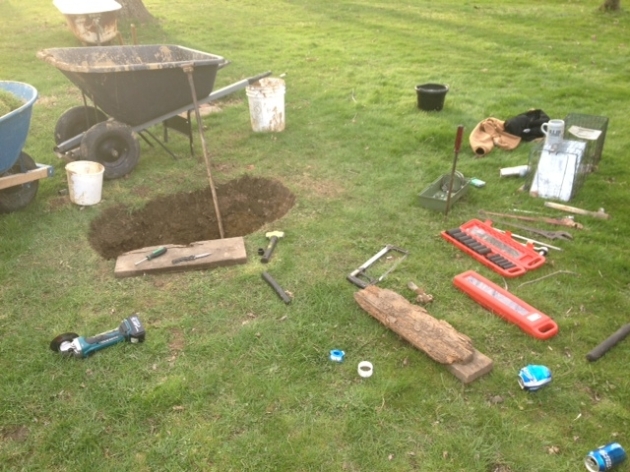 And he found this – an old oil can that was used as a tank. In the old days there was a knob of some sort down in the bucket and you could turn the water to the two back spigots on/off here.

This contraption has certainly seen better days so Mike and his Uncle Dan ripped it out and installed some new line and got it all fixed up.

They went into the basement and turned the water line on here.

And then went back out to see if the spigots worked. The first one worked like a champ but the second one – no dice. And then they noticed quite a bit of water bubbling up from the ground about halfway between the two spigots. They turned off the water in the house and did some more digging. 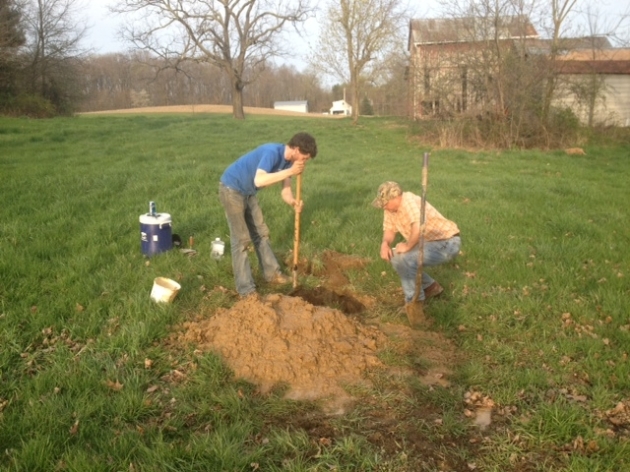 They found the line and I went back inside to turn on the water so they could find the leak.

Then they repaired it with some new hose and a nipple and a clamp and I went back inside to turn the water back on.

Success? Sadly, no. They determined that it is plugged up somewhere between the spot where they fixed the leak and the spigot. Rats! But by now it was dark. And we were hungry. So the second line will have to be tackled another day. I guess two out of three spigots ain’t bad.

On a side note I went against my general rule and bought a tomato in the off season. Those tomato seeds the other day had me so hungry for a BLT. And then I saw this guy at Beiler’s.

It was so beautiful. It almost looked like a real tomato. I know the sign said hydroponic and it’s April in Ohio but I couldn’t help myself.

It was just ok. Of course! Damn it!

My husband and I are bringing an old family farm back to life while simultaneously working full-time jobs and raising two kids. It's a gas!
View all posts by Barton Farms and Gardens →
This entry was posted in Uncategorized. Bookmark the permalink.

1 Response to Cue the Eddie Money – “Give me some water!”